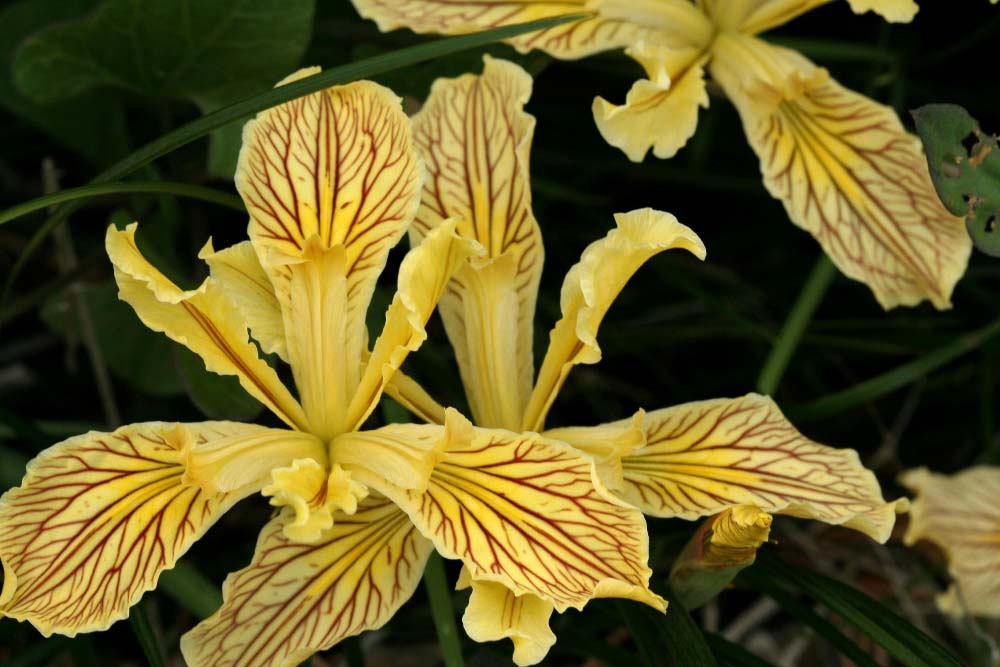 Here in southern Oregon, we’re fortunate to have a nice selection of native Iris available for our gardens. While our native Iris lack the in-your-face showiness of their Bearded Iris relatives, they do have a lovely, refined look to them that many gardeners prefer. They’re also tough, sturdy plants that are both deer-resistant and relatively drought tolerant.

Native Iris do best in sunny to light-shade areas, and work beautifully in borders, or as part of a woodland garden. They bloom from March into late June (depending upon species) and only require occasional water during the summer months – because these plants are already adapted to our summer-dry Mediterranean climate. In addition, most species feature colorful ‘veins’ on the flowers that serve as nectar guides for bees and other pollinators.

The one requirement these plants do have is that they require well-drained soil. If your soil tends toward clay, plant them on a slight mound so excess water can drain away from their crowns quickly – or plant them in pots!

Here are a few species of native Iris that Shooting Star carries regularly: 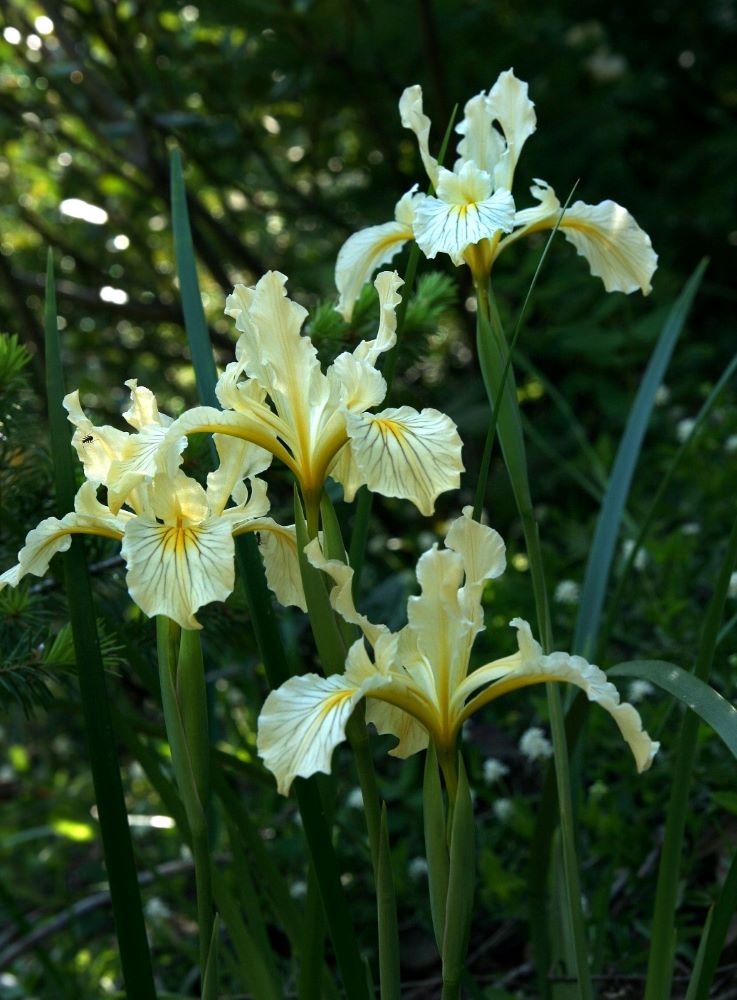 Iris bracteata: Also known as Siskiyou Iris, this lovely plant is endemic to the Klamath-Siskiyou region of southern Oregon and northern California. Flowers are generally creamy white to pale yellow, with contrasting veins of a rich brownish-purple. Plants feature slender leaves, and grow between 6-12” tall.

Iris chrysophylla: Another Iris from southern Oregon and Del Norte County, California. Iris chrysophylla is generally a pale yellow with contrasting purple veins. Plants range from 6”-2’ tall, and are easily distinguished from I. bracteata by their extremely long floral tube. 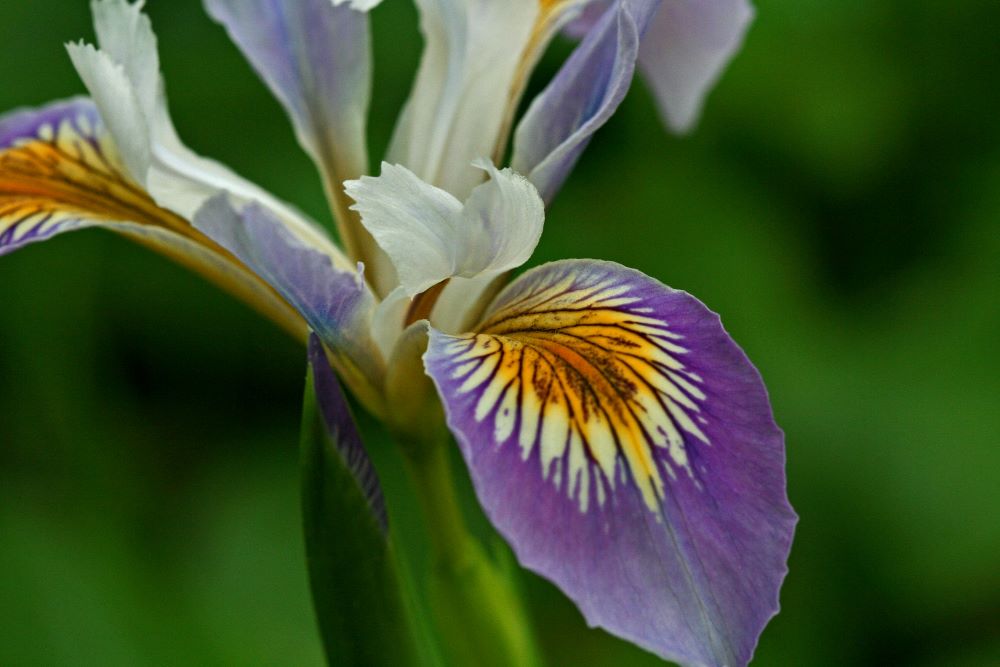 Iris douglasiana: Named after Scottish botanist David Douglas, Iris douglasiana can vary widely in color – from nearly white with blue accents to a rich deep purple. They also prefer part-sun to full shade in the garden, and like water every 2 to 4 weeks during the summer months. If you have encountered a blue Iris while hiking along the coast, it was probably Douglas Iris!

Iris tenax: Also known as Tough-Leafed Iris, ranging from southwest Washington to northern Oregon. In the wild, it is usually found along roadsides and in grasslands and forest openings. Flowers are generally lavender-blue in color, and plants grow in tight clumps – about 1-1/5’ tall. Unlike most other Iris, Tough-leafed Iris does not like to be divided. 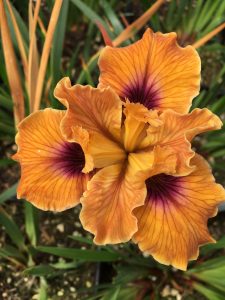 Pacific Coast Hybrids: Pacific Coast Iris hybrids are the real showstoppers of the group. Flowers come in an incredible range of colors – blues, purples, reds, oranges, browns, and multicolors; often with showy ruffled petals. They’re also the fussiest of the bunch (but well worth the effort!): they don’t tolerate clay soils or watering during the heat of the day, and prefer not to be divided every year.

If you’d like to try creating your own native Iris hybrids, it’s easy to do – and a lot of fun. Since most of the Iris described above have similar cultural requirements, you can create mixed plantings of several species. Iris hybridize freely – just collect the seeds when they are ripe, grow them out, and see what exciting color variations you come up with! 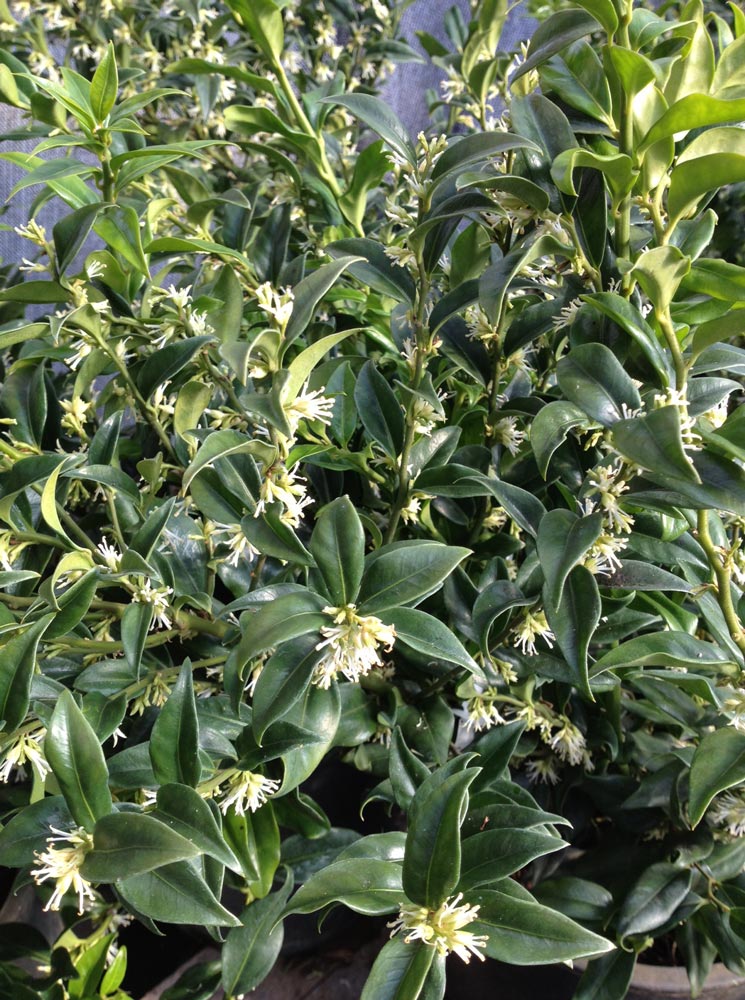 Dark and shady places - like the north walls of a home - can be extremely challenging sites to plant. Sarcococca, or Sweetbox, is an ideal shrub for low-light situations like this. Thriving in everything from part sun to deep shade, Sweetbox is an attractive, broad-leafed evergreen with glossy dark green leaves that provides a good backdrop for airier ferns and flowering shade perennials.

There are a handful of different species ranging from upright shrubs to slowly spreading groundcovers. They all have simple leathery leaves and are for the most part deer resistant, making this genus a true problem solver in a myriad of ways. Not to mention they bloom in late winter when most plants haven't even broken dormancy!

Even though their small fringy flowers are not what you would consider showy, they amply make up for it with a powerfully sweet, vanilla-like fragrance that is sure to get attention. Add in red to black berries that lend a festive quality later in the year, and you've got a great four-season plant!

In return, this understated plant merely asks for moderately fertile soil with decent drainage and regular water throughout the hotter months. That is not to say Sweetbox wouldn't prefer rich, humusy and acidic soil, but it is quite adaptable once established.

Here are some of our favorite types:

Sarcococca confusa gets 3-5' tall and wide at maturity, with a moderat growth rate; perfect for a low hedge or evergreen border in a shade bed! It is such an easy, reliable shrub to grow that it has received an Award of Garden Merit from the Royal Horticultural Society.

Sarcococca ruscifolia or Fragrant Sweetbox is the largest of the more common species reaching 3-6' high and wide with an arching habit and more rounded leaves. It is known to naturally espalier itself against a house and thus can be useful in tight spots and under windows. Its growth is slow to moderate and can easily be kept at 3’.

Sarcococca 'Fragrant Valley' is a compact yet vigorous selection growing to 18-24" tall and 3-4' wide.

Sarcococca 'Fragrant Mountain' attains a slightly larger size at 2-3' tall and 3-4' wide, making it a great alternative to Skimmia japonica.

Sarcococca humilis (Dwarf Sweet Box) is the smallest member of the group, reaching just 1-2' tall and 8-12" tall at maturity. It's an elegant little shrub though, with slender, tapered, glossy dark-green leaves.

All of these varieties are disease resistant and tolerant of drier soils and less than ideal conditions. Sarcococca species are great supporting cast members for the shady garden (…we can't all be stars...) - and a must have for lovers of fragrant plants! 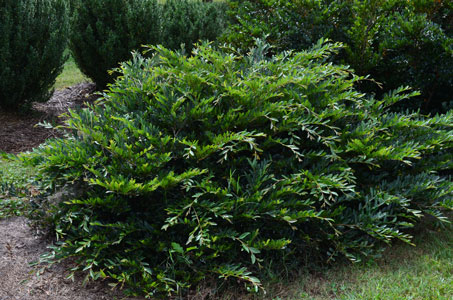 Distylium isn’t a ‘household name’ sort of plant yet – but it should be! It offers Rogue Valley gardeners a great alternative to some of the standard (but often overused) evergreen shrubs like Boxwood, Raphiolepis, Holly, and Skip Laurel.

Not only is Distylium low-maintenance, drought tolerant, and deer resistant; but it also tolerates clay soils well, and is a lovely and graceful-looking shrub. Its leaves are a glossy, rich green and slightly elongated. 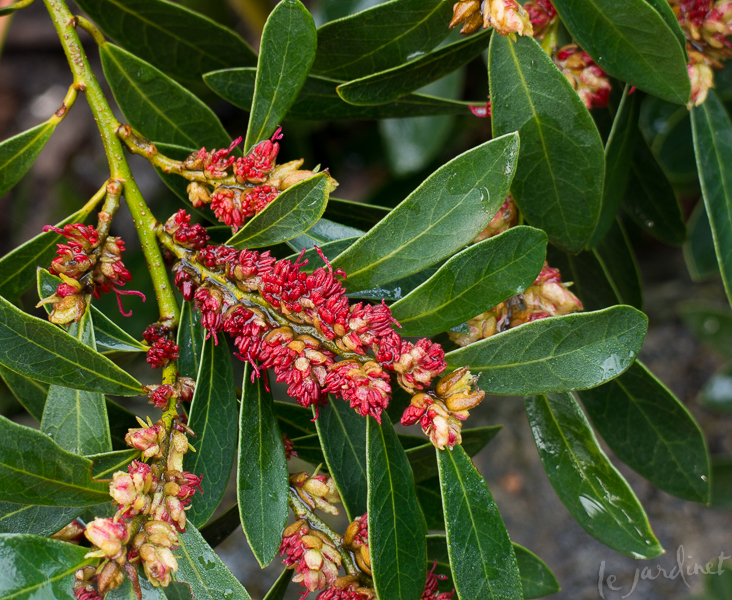 Distylium is related to Witch Hazels (one of its common names is Winter Hazel), and like Witch Hazels they have tiny, exquisite reddish flowers that line the branches in late winter and early spring. They aren’t the sort of flowers that put on a show from a distance, but they’re delightful to see close-up!

Shooting Star Nursery carries several different varieties; giving you a nice range of options for size and shape. There’s basically a Distylium for virtually every place in your garden that needs an evergreen shrub! We generally have the following varieties in stock:

Swing Low: The shortest of the Distylium varieties we carry – about 2-3’ tall by 4-6’ wide.

Vintage Jade: Lovely, layered-looking branches give it a gentle, graceful look (a quality not often associated with evergreen shrubs…). Grows into a spreading, mounded shape – about 3’ tall by 4’ wide.

Linebacker: A taller variety (8-10’ tall by 6-8’ wide), making it a really nice option as a hedge plant. Upright and dense, new growth is reddish-orange, which gradually turns green as the leaves mature.

Distylium grows best in full sun to light shade. These plants are generally disease-free and very low maintenance. A bit of light tip-pruning once a year will help keep plants nice and dense, but even that’s not necessary!

Full-sized Conifers: For Christmas and Beyond!

This week, we're going to talk about the big guys: iconic conifers that will reach over 60' tall at maturity. Most of these conifers are also fast-growing. There's something pretty magical about seeing a big healthy conifer in your yard and thinking back to the year you planted it as a small living Christmas tree. If you've got the room, we highly recommend these beauties - and they're all native to the west coast; four out of the five listed here can be found growing wild in Oregon!

Ponderosa Pine: Ponderosas are the classic pine here in southwest Oregon. They're stately-looking trees with dark green needles and dark, flaky bark. The biggest Ponderosa Pine in the state (268' tall) can be found growing in the Big Pine Campground, northwest of Grants Pass. Ponderosa Pines growing in your yard won't get that tall, but you can expect them to easily reach 60' to 100'.

Incense Cedar: Incense Cedars get their name from their wonderfully aromatic bark. They're lovely trees with rich green needles and reddish bark, and will happily grow in drier sites than most of the other trees mentioned here. They will probably reach a height of 60' - 70' when grown in your yard, but can get much larger in the wild. One of the largest Incense Cedars in the world - the Tanner Lakes Titan - is from right here in Jackson County, and is over 137', with an amazing dbh (diameter at breast height) of 12.8'!

Douglas-fir: Douglas-fir is the Oregon State Tree and is named for pioneering botanist David Douglas. Almost everyone is familiar with them as cut Christmas trees, so rather than include a photo of the tree itself, this photo shows the distinctive cones. They'll reach 80' to 100+' in the home landscape. Visitors to the Oregon Caves Big Tree trail have had a chance to see a 600-800 year-old Douglas-fir with the widest girth in the state.

Giant Sequoia: This is the only plant on the list that isn't native to Oregon, but they do grow well here. The biggest Giant Sequoia on the planet is the General Sherman Tree in Sequoia National Forest, which is around 275' tall, with a 100' crown. In the home garden, expect a mature height of about 100'. Young trees are fast growing, and have a densely pyramidal shape with soft-looking bluish green needles.

Coast Redwood: Anyone who has ever driven along Highway 199 to the coast is familiar with these majestic trees. Coast Redwoods require a bit more water than the other trees listed here (think of the climate they grow in!), and will do especially well if planted along a creek or near a pond. Your tree will likely reach 100' or so tall at maturity. The biggest Coast Redwood in the world is 'Hyperion' - which grows in Redwood National and State Parks in Del Norte County. It measures a stunning 397' tall, making it the tallest tree in the world!

Shooting Star Nursery regularly carries all these trees, albeit in much smaller sizes than listed above! If you like the idea of planting a tree as a living legacy, this might just be the year to plant one of these beautiful conifers.

A Selection of Dwarf and Compact Conifers

Compact conifers - which range in size from 6' to 20' tall - are the perfect-sized plant for a small to mid-sized yard. They're large enough to make a statement but are a much more manageable size than large conifers, which can reach heights of 60-80' tall!

As we mentioned in our last Plant of the Week article, compact conifers never really stop growing - it's just that most of them grow fairly slowly and will remain small for a long time. The sizes given in the plant descriptions below are a good representative of their likely size in 10-20 years. Here are a some of our favorite compact conifers:

'Tannenbaum' Pine: 'Tannenbaum' is a taller variety of the popular Mugo Pine. They are dark green, with a dense pyramidal shape. Plants are moderate growing (6' to 12'/year) and will be approximately 10- 15’ tall by 6-12’ wide in 10 years.

'Black Hills' Spruce: ‘Black Hills’ Spruce is more heat tolerant than most other spruce, and has a nice greenish-blue color. They’re slow growing (generally less that 6”/year, and will reach 15-20’ tall by 10-15’ wide in 10 years.

'Hoopsi' Blue Spruce: ‘Hoopsi’ is the very bluest of blue spruces! Plants grow around 6-12”/year, and will generally be about 25’ tall by 15’ wide at maturity.