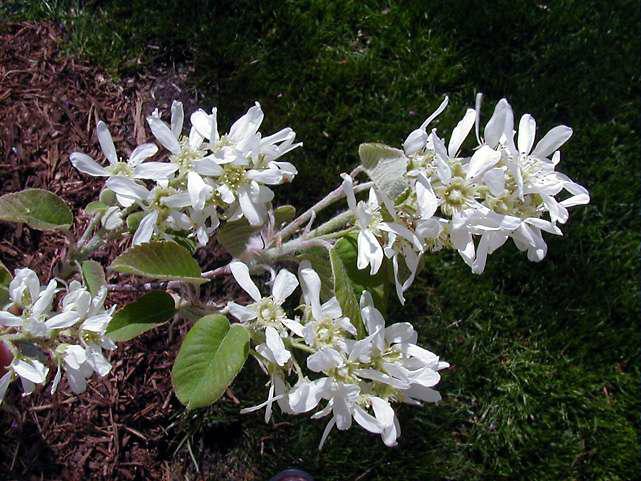 We are absolutely in love with this serviceberry! It works well as either a small single-trunked tree or large multi-trunk shrub; personally, we like it multi-stemmed but we generally have single-stemmed plants available as well. In either case, you'll find that Amelanchiers (aka: Serviceberries) are a wonderful addition to your landscape! 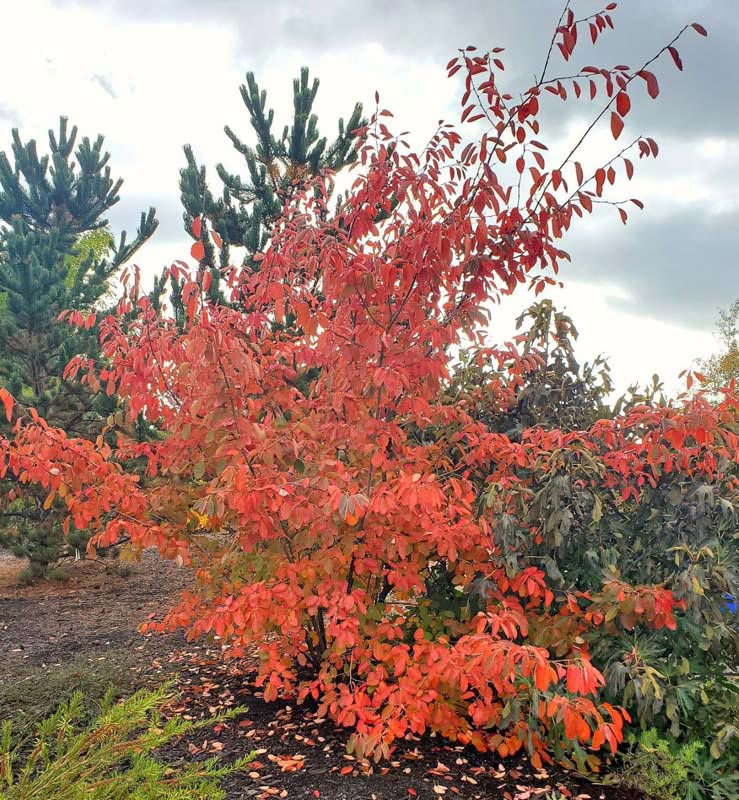 'Autumn Brilliance' provides great visual interest throughout the year. New leaves emerge bronze in early spring; becoming a lovely blue-green in summer, and a fiery orange-red in fall. Clusters of white flowers appear in late and are followed by tasty blue-black fruits that are enjoyed by both birds and humans.

Plants are fairly fast growing, and are easy to care for. They do well in either full to part sun, and prefer well-drained soils. They can be fairly drought tolerant once established, and reach 20' by 15' at maturity. They're a great alternative for multi-trunked Japanese maples if you have a full-sun exposure.

We also carry two other serviceberries.

Our native western serviceberry (Amelanchier alnifolia) is a bit smaller than 'Autumn Brilliance', and generally reaches about 12' by 6' at maturity. They bloom and fruit about a month later, are easy to care for, and are excellent wildlife-friendly plants: the berries are heavily visited by a variety of pollinators, birds love the berries, and the plants also provide nice nesting sites for songbirds. 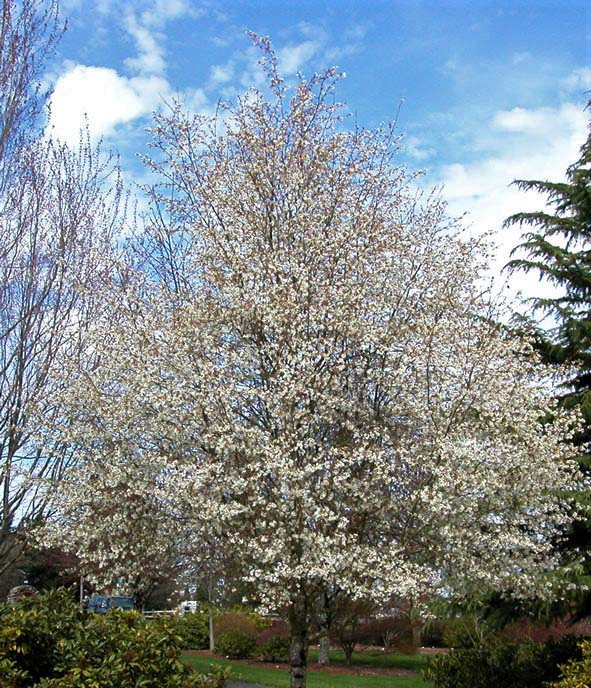 Wondering what varieties and sizes we currently have in stock? Check out our current Retail Availability list! ‘Autumn Brilliance’ and ‘Spring Flurry’ are both in the “Trees” section; western serviceberry (Amelanchier alnifolia) is found in the “Shrubs” section! 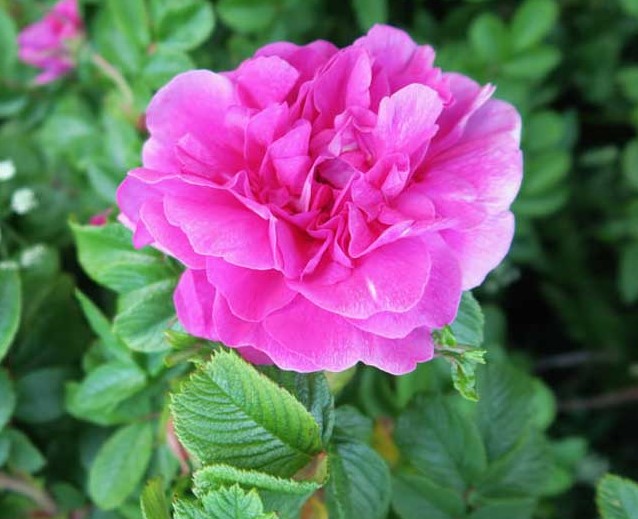 These amazingly tough roses provide us with intoxicatingly fragrant flowers; long lasting, vitamin-rich rose hips; interesting leaf texture - as well as drought tolerance, disease resistance, and deer resistance. They’ll even grow and bloom in partial shade. Why would you ever plant any other rose?

Rugosa roses were originally wild roses native to Asia, but they’ve been cultivated and naturalized in many parts of the world. Both varieties we carry (see below) will grow to about 5’ to 7’ tall and wide and will spread by runners, making them a good barrier or hedge plant. Rugosas also look great in a mixed border, especially because they don't need the extra care of sprays that most other roses need. Flowers come in single or double petaled forms and range in color from deep magenta pink to red to pure white and yellows. Once established, rugosa roses only need an occasional soak and prefer full sun, although they will do fine in part sun.

Alba: Big white single flowers – up to 3.5” across - with yellow tufted stamens sit atop deep green, quilted leaves. These lovely, bushy plants are known for their hardiness and tolerance to salt sea conditions. Fat round bright red hips give a bonus of fall color, providing food for local wildlife. Flowers to 3.5” across. Moderate fragrance. American Rose Society rating of 9.2 - out of a possible 10 points. 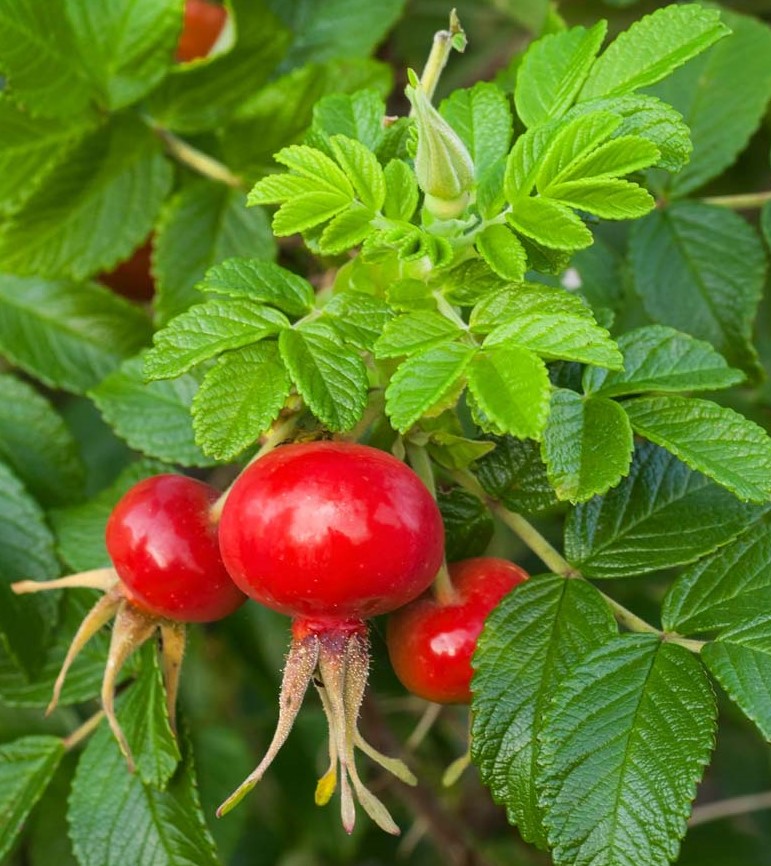 Fun fact: Rugosas have also been called “sea tomato roses” because of their large orange to bright-red rose hips that appear in fall and last throughout the winter; providing a great source of nourishment for overwintering birds like robins, cedar waxwings, and hermit thrushes. The rose hips are prized by humans too – they’re a great source of Vitamin C and a popular ingredient in tea blends.

Linden trees are, literally, a sweet addition to the home landscape. Their fragrant, nectar-rich flowers are a delight for humans and pollinators alike. But full-sized lindens, which reach 35’ to 50’ tall at maturity, can overwhelm a small yard. And that’s one of the many wonderful things about ‘Summer Sprite’.

‘Summer Sprite’ is a natural semi-dwarf tree that reaches just 15’ tall by 10’ wide at maturity. It has a lovely rounded pyramidal shape with dark green, heart-shaped leaves. The fragrant, creamy-yellow flowers appear in early summer, and foliage turns a rich golden-yellow in fall.

Linden trees are beloved by beekeepers (if you get a chance, try some linden flower honey!). In fact, when these trees are in full bloom, you can often hear the happy buzzing of bees from several feet away. The flowers, when picked and dried, can also be brewed as a delicious honey-scented tea – just make sure to leave enough blossoms for our pollinator friends!

“Summer Sprite’ thrives in average, well-drained soils and can be grown in full sun to part shade.

We really, really like Pieris. They’re evergreen, deer resistant, relatively low-maintenance shrubs that grow well in part sun to full shade. They even grow well in containers! In short, they’re pretty versatile plants that come in a variety of sizes - from just 2’ tall up to 8’ tall.

Of all the Pieris varieties out there, though, there’s one that is our hands-down favorite (even though, like parents, we’re not supposed to have favorites...): Meet Pieris ‘Cavatine’.

Cavatine is a gorgeous dwarf variety, reaching roughly 2’ – 3’ tall and wide. The dark green foliage really sets off the abundant spring bloom of white, bell-shaped flowers that look a bit like lily-of-the-valley. Even when the bloom is finished, the dark green leaves are a wonderful complement to other shade-loving perennials including Heuchera, Aquilegia, Erica, and Hellebore.

Another thing in Cavatine’s favor? It provides year-round interest in the garden. Pale green flower buds appear in the winter, contrasting nicely with the evergreen foliage. Cascades of pure white flowers arrive in early spring, followed by bright red new growth that gradually changes to dark green as the plant matures.

Pieris ‘Cavatine’ is in full bloom right now, and we’ve got a good assortment of them in both 1-gallon and 2-gallon sizes. We’re guessing they’ll quickly become a favorite of yours too!